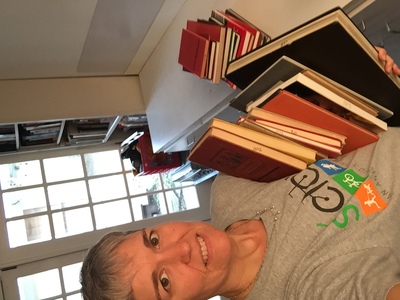 Sarah Jones has been working with her dreams since 2004 and believes that dreams come to us always in the service of the Higher Self and in service of “Community as We are Meant to Be” and her goal in working with dreams and encouraging others to do so is for us to connect with the archetypal power that flows through all of us. She says, "When we use our hands and our hearts to bring a dream into the world in some way, it as a process of holding the tension between the light and the dark.   We know we are “in the flow” when we have held the space so that something new can arise.”
In 2017, she felt so strongly about what was going on in the United States, that she gave that year to feminist activism -- which is now the driving force in her work - creating art and engaging others in artistic practice which amplifies and strengthens the feminine.
Sarah earned a BA in Psychology from the University of Texas at Austin in 1994 and a BFA from The University of Texas at San Antonio in 2009. Sarah's work has been shown across Texas and in Kerkrade, The Netherlands and can be found in the collection of the University Health System in San Antonio, Texas and in private collections in Georgia, Louisiana and Texas.  http://www.sarahannjones.com
Home Finish