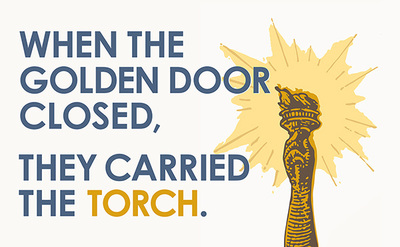 When the Golden Door Closed, They Carried the Torch.  Advocacy in the Age of Immigration Restriction

As you stand in front of the David Berg Rare Book Room you can view a special exhibit by American Jewish Historical Society called, "When the Golden Door Closed, They Carried the Torch.  Advocacy in the Age of Immigration Restriction."

When Emma Lazarus wrote the New Colossus in 1883, she knew that not all Americans accepted the idea of Lady Liberty as a “Mother of Exiles” who embraced the “tired…poor… huddled masses.” Yet Lazarus’s belief in a country strengthened by those “yearning to breathe free” motivated her to write on behalf of immigrants and a progressive and welcoming America. In 1924, the Johnson-Reed Act heavily restricted the number of immigrants who could enter America. Lazarus’s spiritual descendants protested these laws, on behalf of all immigrants from every nation and creed. Attorney Max Kohler fought immigration restrictions through the legal system, social worker Cecilia Razovsky aided immigrants arriving in Cuba, and Justine Wise Polier campaigned for the Wagner-Rogers bill that would allow German children safe haven in America above the quota numbers. These stories from the AJHS archive show how even in a period where the dominant rhetoric was that of “no immigration,” immigrant rights remained critical to the ambitions of many American Jewish organizations, and to their ultimate sense of American identity. They carried the torch.