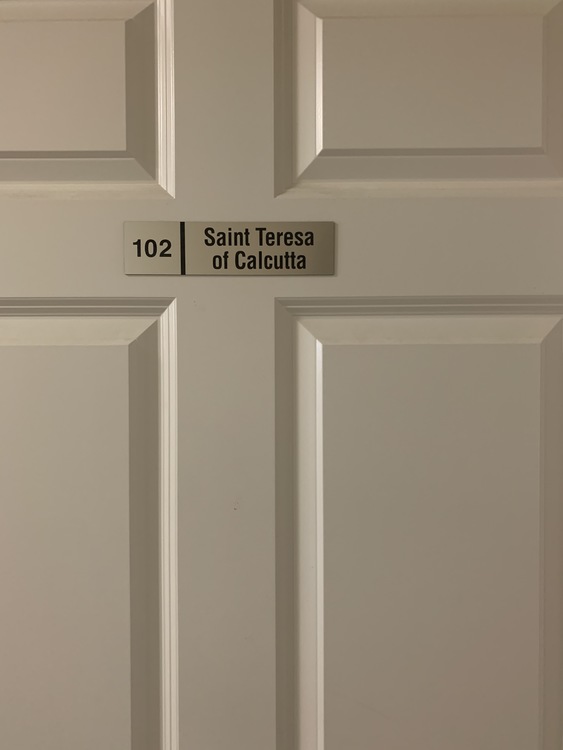 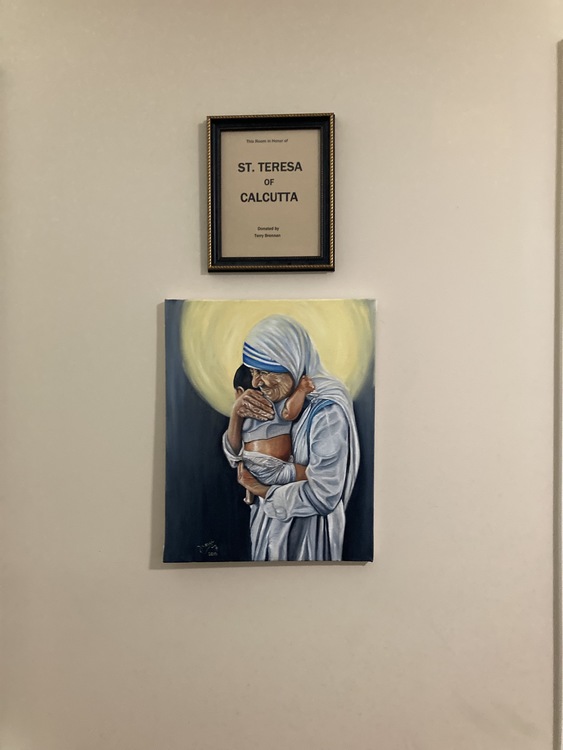 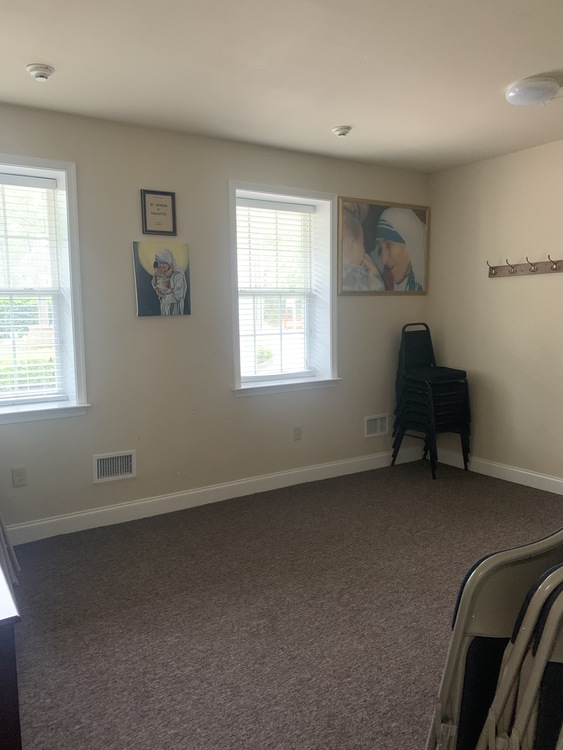 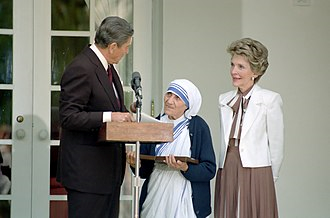 "Our Lord wants me to be a free nun covered with the poverty of the cross. Today, I learned a good lesson. The poverty of the poor must be so hard for them. While looking for a home I walked and walked till my arms and legs ached. I thought how much they must ache in body and soul, looking for a home, food and health. Then, the comfort of Loreto [her former congregation] came to tempt me. 'You have only to say the word and all that will be yours again,' the Tempter kept on saying. ... Of free choice, my God, and out of love for you, I desire to remain and do whatever be your Holy will in my regard. I did not let a single tear come."

The remarkable woman who would be known as Mother Teresa began life named Agnes Gonxha Bojaxhiu. Born on August 26, 1910 in Skopje, she was the youngest child born to Nikola and Drane Bojaxhiu, Receiving her First Communion at the age of five, she was confirmed in November 1916. Her father died while she was only eight years old, leaving her family in financial straits.

Gonxha’s religious formation was assisted by the vibrant Jesuit parish of the Sacred Heart in which she was very involved as a youth.

Agnes subsequently moved to pursue missionary work. She left her home in September 1928 at the age of 18 to join the Institute of the Blessed Virgin Mary, known as the Sisters of Loreto, in Ireland. She received the name Sister Mary Teresa after Saint. Therese of Lisieux. In December of 1929, she departed for her first trip to India, arriving in Calcutta. After making her First Profession of Vows in May 1931, Sister Teresa was assigned to the Loreto Entally community in Calcutta and taught at Saint Mary’s School for girls.

Sister Teresa made her Final Profession of Vows, On May 24, 1937, becoming, as she said, “the spouse of Jesus for all eternity.” From that time on she was called Mother Teresa.

She continued teaching at Saint Mary’s and in 1944 became the school’s principal. Mother Teresa’s twenty years in Loreto were filled with profound happiness. Noted for her charity, unselfishness and courage, her capacity for hard work and a natural talent for organization, she lived out her consecration to Jesus, in the midst of her companions, with fidelity and joy.

It was on September 10, 1946 during a train ride from Calcutta to Darjeeling for her annual retreat that Mother Teresa received her “inspiration, her call within a call.” On that day, in a way she would never explain, Jesus’ thirst for love and for souls took hold of her heart and the desire to satiate His thirst for souls became the driving force of her life.

By means of interior locutions and visions, Jesus revealed to her the desire of His heart for “victims of love” who would “radiate His love on souls.” “Come be My light,” He begged her. “I cannot go alone.”

Jesus revealed His pain at the neglect of the poor, His sorrow at their ignorance of Him and His longing for their love. He asked Mother Teresa to establish a religious community, Missionaries of Charity, dedicated to the service of the poorest of the poor. It’s at this time that she was called Mother Teresa.

Nearly two years of testing and discernment passed before Mother Teresa received permission to begin. On August 17, 1948, she dressed for the first time in a white, blue-bordered sari and passed through the gates of her beloved Loreto convent to enter the world of the poor.

After a short course with the Medical Mission Sisters in Patna, Mother Teresa returned to Calcutta and found temporary lodging with the Little Sisters of the Poor. On December 21, she went for the first time to the slums. She visited families, washed the sores of some children, cared for an old man lying sick on the road and nursed a woman dying of hunger and tuberculosis. She started each day with Mass and Holy Communion then went out, rosary in her hand, to find and serve Him amongst “the unwanted, the unloved, the uncared for.” After some months, she was joined, one by one, by her former students.

On October 7, 1950 the new congregation of the Missionaries of Charity was officially established in the Archdiocese of Calcutta. By the early 1960s, Mother Teresa began to send her Sisters to other parts of India. The Decree of Praise granted to the Congregation by Pope Paul VI in February 1965 encouraged her to open a house in Venezuela. It was soon followed by foundations in Rome and Tanzania and, eventually, on every continent. Starting in 1980 and continuing through the 1990s, Mother Teresa opened houses in almost all of the communist countries, including the former Soviet Union, Albania and Cuba.

Mother Teresa’s inspiration was not limited to those with religious vocations. She formed the Co-Workers of Mother Teresa and the Sick and Suffering Co-Workers, people of many faiths and nationalities with who she shared her spirit of prayer, simplicity, sacrifice and her apostolate of humble works of love.

This spirit later inspired the Lay Missionaries of Charity. In answer to the requests of many priests, in 1981 Mother Teresa also began the Corpus Christi Movement for Priests as a “little way of holiness” for those who desire to share in her charisma and spirit.

During the years of rapid growth the world began to turn its eyes towards Mother Teresa and the work she had started. Numerous awards, beginning with the Indian Padmashri Award in 1962 and notably the Nobel Peace Prize in 1979, honored her work, while an increasingly interested media began to follow her activities. She received both prizes and attention ‘for the glory of God and in the name of the poor.”

There was a heroic side of this great woman that was revealed only after her death. Hidden from all eyes, even from those closest to her, was her interior life marked by an experience of a deep, painful and abiding feeling of being separated from God, even rejected by Him, along with an ever increasing longing for His love. She called her inner experience, the darkness. The “painful night” of her soul, which began around the time she started her work for the poor and continued to the end of her life, led Mother Teresa to an ever more profound union with God. Through the darkness she mystically participated in the thirst of Jesus, in His painful and burning longing for love, and she shared in the interior desolation of the poor.

In spite of increasingly severe health problems towards the end of her life, Mother Teresa continued to govern her Society and respond to the needs of the poor and the Church. By 1997, Mother Teresa’s Sisters numbered nearly 4,000 members and were established in 610 foundations in 123 countries of the world. In March 1997 she blessed her newly-elected successor as Superior General of the Missionaries of Charity, Sister Nirmala, and then made one more trip abroad. After meeting Pope John Paul II for the last time, she returned to Calcutta and spent her final weeks receiving visitors and instructing her Sisters.

On September 5, Mother Teresa’s earthly life came to an end. She was given the honor of a state funeral by the Government of India and her body was buried in the Mother House of the Missionaries of Charity. Her tomb quickly became a place of pilgrimage and prayer for people of all faiths, rich and poor alike.

Mother Teresa left a testament of unshakable faith, invincible hope and extraordinary charity. Her response to Jesus’ plea, “Come be My light,” made her a Missionary of Charity, a “mother to the poor,” a symbol of compassion to the world, and a living witness to the thirsting love of God. As a testament to her most remarkable life, Pope John Paul II permitted the opening of her Cause of Canonization. On December 20, 2002 he approved the decrees of her heroic virtues and miracles.

On the occasion of her beatification, the Missionaries of Charity issued the following statement:

“We, the Missionaries of Charity, give thanks and praise to God that our Holy Father, Pope John Paul II, has officially recognized the holiness of our mother, Mother Teresa, and approved the miracle obtained through her intercession. We are filled with joy in anticipation of the Beatification that will take place in Rome on Mission Sunday, 19 October 2003, the closest Sunday to the 25th anniversary of the Holy Father’s Pontificate and the end of the Year of the Rosary.

“Today, after three and a half years of investigation and study, the Church confirms that Mother heroically lived the Christian life and that God has lifted her up as both a model of holiness and an intercessor for all.

“Mother is a symbol of love and compassion. When Mother was with us, we were witnesses to her shining example of all the Christian virtues. Her life of loving service to the poor has inspired many to follow the same path. Her witness and message are cherished by those of every religion as a sign that “God still loves the world today.” For the past five years since Mother’s death, people have sought her help and have experienced God’s love for them through her prayers. Every day, pilgrims from India and around the world come to pray at her tomb and many more follow her example of humble service of love to the most needy, beginning in their own families.

“Mother often said, ‘Holiness is not the luxury of the few, it is a simple duty for each one of us. May her example help us to strive for holiness: to love God, to respect and love every human person created by God in His own image and in whom He dwells, and to care for our poor and suffering brethren. May all the sick, the suffering, and those who seek God’s help find a friend and intercessor in Mother.”

Following her beatification, a long wait for a second miracle then followed. On December 17, 2015 Pope Francis announced a second miracle had been attributed to the intercession of Mother Teresa. The miracle involved a Brazilian man who was afflicted with tumors who was miraculously cured. This cleared the way for Mother Teresa’s canonization.

Mother Teresa was canonized on September 4, 2016 by Pope Francis.

Mother Teresa’s Statue and Meditation Area were donated by Bob and Marge Merkert who had the opportunity to meet Mother Teresa.

Bench: Pray for all those who strive to walk in your footsteps and do “Something beautiful for God.”