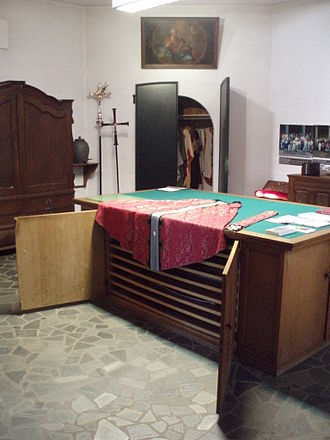 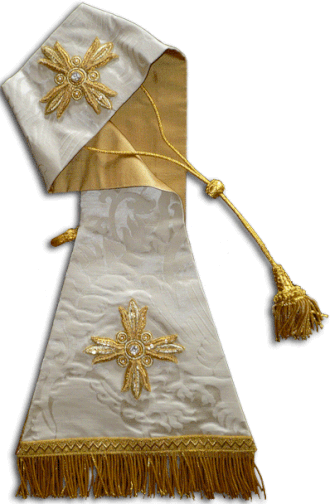 The Sacristy is a room at Discovery House where vestments and other things used for Mass are kept. The sacristy is also where the priest and attendants vest and prepare before the service. They will return there at the end of the service to remove their vestments and put away any of the vessels used during the service. The hangings and altar linens are stored there as well. The word "sacristy" derives from the Latin sacristia, sometimes spelled sacrastia, which is in turn derived from sacrista ("sexton, sacristan"), from sacra ("holy").

The maniple is a liturgical vestment used primarily within the Catholic Church, and occasionally used by some Anglo-Catholic and Lutheran clergy. It is an embroidered band of silk or similar fabric that is hung over the left arm. It is only used within the context of the Mass, and it is of the same liturgical colour as the other Mass vestments. The purpose of the maniple is uncertain, but it probably originated as a cloth the priest could use to wipe his hands and face.

The stole is a liturgical vestment of various Christian denominations. It consists of a band of colored cloth, formerly usually of silk, about seven and a half to nine feet long and three to four inches wide, whose ends may be straight or may broaden out. The center of the stole is worn around the back of the neck and the two ends hang down parallel to each other in front, either attached to each other or hanging loose.