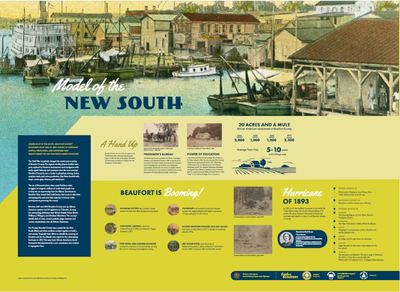 Unlike most of the South, Beaufort County prospered from 1870 to 1893 thanks to northern capital, fresh ideas, and industries that transformed the old plantation-based economy.

The Civil War completely changed the society and economy of the County. The region’s wealthy planter families were gone, replaced by Northern businessmen and immigrants with ready capital. Industry and commerce were the new economy. The County became a leader in phosphate mining, timber, maritime trade, and cotton production. Downtown, Bay Street bustled with shops, cotton-gins, wharves, and warehouses.

The era of Reconstruction, when most Southern states struggled to integrate millions of newly freed people into society, was an empowering time for local African Americans. They owned land, built homes, had access to education and paying jobs, and used their majority to become active participants in governing the county.

Between 1867 and 1890 the County sent six African American senators and 24 legislators to the capitol, Columbia. Among the outstanding politicians were Robert Smalls, Prince Rivers, William J. Whipper, and Abraham Murchison. The county’s sheriff, clerk of court, coroner, probate judge, treasurer, and county commissioner were all African Americans.

For 30 years, the County was a model for the New South. Black and white residents worked together to build a new society. Tragically their efforts to rebuild the Sea Islands economy  were wiped out by a devastating hurricane in 1893. Two years later, African Americans found themselves disenfranchised by a new constitution that resulted in segregation laws.