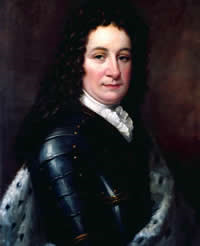 Sir William Keith was born in Scotland and came to America in 1714. In 1717 he was appointed to the position of Lt. Governor of Pennsylvania by William Penn. When Penn died in 1718, his widow Hannah took over the Proprietorship of Pennsylvania. She and Keith had differing ideas on how Pennsylvania should be run. Keith was popular with the people, but did not always honor Hannah Penn's wishes. As a result, he was replaced in office, and after serving on the Pennsylvania Assembly for a few years, returned to England. Debt owed on his father's estate, and his own love of a lavish lifestyle, led to financial ruin and he ended up in debtors' prison at the end of his life.